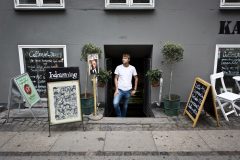 Jannik Lawaetz in front of the first LuggageHero shop in Copenhagen

In the 12 months since bag and suitcase storage firm LuggageHero opened its first outlets in Copenhagen, the company, without so much as a tentative step forward to consolidate its business position, has moved straight into the two biggest city markets you could imagine – London and New York. (Beijing and Mumbai will just have to wait.)

London came first. LuggageHero launched there on March 1 last year (2017), signing up small and medium-size shops and cafés. Already the company says it has stored more than 20.000 pieces of luggage.

The second launch was in New York City, on 1st December 2017. In the first month the company says it looked after more than 1000 pieces of luggage, which is a figure the London outlets took six months to achieve.

The user makes a booking through the LuggageHero website. Once they are in the shop, they check themselves in on a mobile (cell) phone, using the link provided when booking.  Bags are fitted with a security seal. Users check in again on return and pay online, €1/hour (€2 handling fee) per bag. You never pay more than €10 per bag for the first 24 hours. (€5 per bag for additional days.)

CEO & Founder Jannik Lawaetz told me via email: “In London we have grown from 30 to 100 shops, with more coming. We have high expectations for 2018, with a lot of new initiatives and partnerships.”

Lawaetz added that even hotels have joined the scheme, looking after luggage for people who aren’t actually staying there. One example is the Hotel Belgravia near Victoria Station.

LuggageHero asks customers to say would they think on its Facebook site https://www.facebook.com/luggagehero/reviews. As of today it had a rating of 4.8 out of 5 stars from 86 reviews, with 80 5 star reviews, and four 1 star reviews, two of which referred to shops which no longer offer the service. Lawaetz responds online to unsatisfied people. 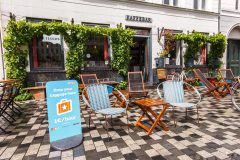 Liz Barber on 8th January commented: “Super service @Metroexpress – just 5 mins walk from Kings Cross, the lovely gent working in the store had stored our bags, issued receipt tickets and helped me with the check in app on my phone in minutes and equally smooth when we returned to pick them up again.”

Chris Mosley noted, on the same day: “My first experience of Luggage Hero after searching for a cheaper alternative to the left luggage service at Liverpool Street Station, London. It worked out at less than half the price quoted at Liverpool Street for four bags, there were no queues, the staff were very friendly, and it felt safe leaving our luggage there. It is only a couple minutes walk from the station and stayed open until 10pm.

Trecia Chow reported: “We used it in Copenhagen. Smooth check in and check out at this hotel location right next to the central station. First time, but instructions were pretty clear to follow. Everything via email was easy to use.”

Christian Lønstrup Berndt wrote on 8 December 2017: “we first went to Left Luggage at Liverpool Street Station.  The price for storing 3 bags for 8 hours almost exceeded the value of the contents.” They went to LuggageHero, nearby. “[It] had a sign outside for easy spotting.

The personnel was professional, easy-going and friendly. Overall a smooth experience and very recommendable.”

“Our customers are really happy with the experience and service”, said Lawaetz. “Each shop also has its own reviews that you can read by going into their profile.”

Looking for an alternative view, I found only minor grumbles, such as surly staff in one place. One person did point out that shops can be busy, which could slow things down when you’re picking up your bags, but there didn’t seem to be much of this.

No cash changes hands. It’s all done via a mobile phone and a credit card. The website notes that you aren’t charged simply for making a booking; you don’t pay anything unless you drop off your baggage at a shop. “No amount will be charged if you fail to show up for your booking.” Luggage is automatically insured at up to $2,000/€1700 per item.

One possible deal LuggageHero is exploring is with Airbnb management company Hostmaker. An obvious difficulty with checking in to an Airbnb property is: where do you put your luggage in the morning? It’s easier in a hotel, where, even if your room isn’t available until 3 PM, the hotel will look after your bags in the meantime. This option isn’t available with many Airbnb stays. You need somewhere convenient to stow your cases before you can pick up your key.