Copenhagen is sprinkled in stardust. The grand master of fairy tales, Hans Christian Andersen, the Little Mermaid, the Opera House and now the Øresund Bridge linking to Sweden

The sparkling Danish capital is a regular leader on the world list for quality of life. Part of the repute of this beautiful water’s-edge city is its style and grace, which you can find both indoors and out. The most conspicuous thing is the tight terraces of  houses throughout the old centre, their facades painted in a kaleidoscope of cheerful colours.

Indoors the city proclaims Danish design, from porcelain to the classic B&O audio equipment of the 1970s. In addition to high design, there are royal palaces, Viking remains, phalanxes of cyclists, seemingly in command of the city-centre streets, and that enduring fairytale appeal of a certain little mermaid.

02 Suggested things to see and do 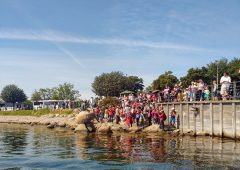 The Little Mermaid (just left of centre) and her public

What are we to make of one of the most magnetic of all tourist attractions? We approached it, from the water on a one-hour tour of Central Copenhagen, as a coach party of Oriental visitors inspected and photgraphed it from the shore. I had not realised how close to land the mermaid is, no more than a few metres, and how diminutively small she is.

If we had visited with any hope of spiritual uplift, I’m sure we would have been disappointed, not by the situation and size, but by the inexorable press of tourists. But every great city has an instantly recognisable attraction or two to draw the crowds in. No one is going to spend more than half an hour at the statue, so that leaves a lot of sightseeing time for less well know attractions. Other, less-favoured, cities have the problem of drawing people in when they lack any obvious and widely-known touristic lures. What would they give for their own Little Mermaid.

This was eating-out presented as a work of art. Mielcke & Hurtigkarl Restaurant sits in a converted 1744 orangery on the edge of the The Royal Danish Garden Society’s Frederiksberg Gardens, one of the city’s many grand parks. Chef Jakob Mielcke takes his inspiration from the world, while sourcing vegetables and herbs from the royal gardens – lovage to flavour the butter, for example.  Local forests provide other ingredients. (What about beech leaf sorbet or chocolate mixed with birch bark?) Each of the inventive five courses, with a suggested wine, and some additional chef’s creations, was an exquisite creation. Copenhagen dining is expensive, but it is a fine thing to focus on one top class meal during your stay. This is certainly it. www.mhcph.com 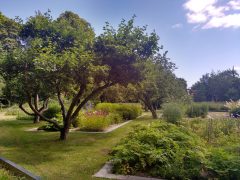 It is one of the great joint passions. Karen Blixen loved a country, Africa; and a man, Denys Finch Hatton. Meryl Streep plays Karen wonderfully in the film Out of Africa up to the point where she returns to Denmark in 1931, her coffee business in ruins and her lover (Robert Redford) dead in a plane crash. The story of the rest of her life (she died in 1962, now a celebrated writer) is told in her beautifully preserved house, set in blissfully tranquil grounds on the waterfront at Rungsted. It is as she left it, with the original furniture, and her own paintings and drawings. Take the train to Rungsted Kyst station from Copenhagen (30 minutes). The house is a 15 minutes signed walk. It passes her grave. Helsingør, forever linked to Hamlet, is 30 minutes further on by train.

Viking boats were famously burnt with their heroes. But some had a more enduring use. Five worn-out vessels were sunk in the mouth of the fjord leading to the town of Roskilde, around 1100, to block the channel and thwart invaders. Excavated in 1962, their remains are on show in the impressive Viking Ship Museum. The star is oak-built Skuldelev 2, one of the biggest Viking longships. It was built in Dublin, then a Viking outpost, in 1042. The collection includes a full size, sea-going recreation of it, the Glendalough Sea Stallion. Craftsman built it in 2004, using tools the Norsemen would have employed. The museum is a short walk from Roskilde train station (22 minutes from Copenhagen), past the massive medieval cathedral, where kings Harold Bluetooth and Sweyn Forkbeard, conqueror of England, are buried.

It is the perfect city tour, Canal Tours Copenhagen’s one hour circuit of the waterfront (free with the Copenhagen Card), slipping out from Nyhavn, and drifting past city landmarks such as Amalienborg Palace, home of Denmark’s royal family. Striking new buildings, including the Copenhagen Opera House, the Black Diamond Library and novel student accommodation made from freight containers, line the waterfront. We diverted through the eccentric Freetown Christiania, a green, car-free neighbourhood. The trip passes the Little Mermaid, seen from the water. Towering above her is Kastellet, the star-shaped 17th-century fortress. The Harbour Ring is an 8 mile pedestrian and bicycle circuit of the city.

Poor little mermaid. A new icon has replaced her on some Copenhagen guide books. The immense Øresund Bridge, opened in 2000; soaring out of the city, it links Denmark to Sweden. When it was built, it was the world’s longest cable-stayed road and railway bridge (490 metre central span).

Try it out with the Around the Sound ticket, giving unlimited two day, two-country rail travel in the Øresund Region. Ride the bridge into Sweden, then cross back on the Helsingborg to Helsingør ferry for  Hamlet’s Elsinore.

There’s a fully 21st Century attraction: the Opera House, opened in 2005. It literally drips with gold – just like the setting for an Andersen tale. The auditorium ceiling of this technical, architectural and artistic marvel is adorned with 105,000 sheets of gold leaf.

The grand master of fairy tales, Hans Christian Andersen, is celebrated in many places in Denmark’s capital.

The life and haunts of the man who gave the world sound sense dressed as fantasy, in such enduring stories as The Princess and the Pea, The Ugly Duckling and The Emperor’s New Clothes, are celebrated in Denmark’s biggest cultural party.

Consider hiring a guide for the full Andersen treatment, in the city he loved so much that he reserved a second birthday for the day he arrived there.

The principal places or things with Andersen associations : 1) Andersen’s restored attic room, in the city’s Magasin department store in Vingårdstræde. They made exact copies of his original furniture for the only one of his Copenhagen homes open to visitors.

2) Nyhavn (New Harbour), where this famous nomad had three addresses among the  multicoloured, 17th-century, gabled buildings, restored and turned over to restaurants and cafes. 3) Tivoli Gardens, inspiration for The Nightingale. 4) Den Lille Havfrue staring wistfully out to sea – but I can’t imagine any guide leaving the Little Mermaid out.

Guided tour “In the footsteps of Andersen” – £88.50 for two: www.guides.dk. Association of Authorized Guides 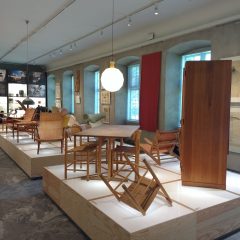 The city is renowned for Danish design, from porcelain to the classic B&O audio equipment of the 1970s. The best public collection is at the Design Museum. If one piece of furniture defines Danish design, it is the chic. The display “The Danish Chair – An international Affair”, shows 100 elegant ways to sit down. We lingered over coffee and pastries, after delicious smørrebrød (open sandwiches), in the museum’s Klint cafe. 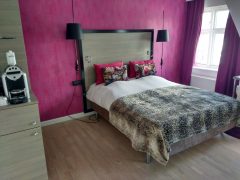 The bright and colourful Andersen Hotel, recently renovated,  is a five minute walk from the platforms of Copenhagen Central Station. This is one of the stand-out buildings in a previously run-down, edgy and rough district.

In the lobby the vibrant colours of designer Philippe Starck and the UK’s Designers Guild burst upon guests like a fireworks display at the nearby Tivoli Gardens (visible from our bedroom). The owners commissioned swish Scandinavian design companies to fashion the lighting, the furniture and even the hangers in the bedrooms. Inside only the antique lift is original.

In the lobby the works of local artists are showcased. we inspect them during the evening “wine hour”, the hotel’s definition of hygge. That sent us forth into the nearby city centre in good humour.

Central Station is four stops from the airport.

Shakespeare gave Helsingør (Elsinore) enduring fame through Hamlet, making it probably the best know small town (around 60,000 people) you could name. Apart from Stratford upon Avon and Windsor, the only one I can think of in Europe is Weimar.

Kronborg Castle, one of northern Europe’s most important Renaissance castles, is the setting for Hamlet.