Basel, at the top right-hand corner of the country, is entry-level Switzerland

Basel, at the top right-hand corner of the country, is entry-level Switzerland

Basel, at the top left-hand corner of the country, is entry-level Switzerland. It’s the easiest part of the country to reach overland from the UK –  about six hours by train from London. We travelled from St Pancras, changing in Paris.

This proud and ancient city straddles the River Rhine. Its heart is small, picturesque and easy to walk, despite the hills. I was intrigued by the world’s (possibly) smallest museum, the ancient river ferry, a century of fountains and some dreamy Monet waterlilies in a beautifully sylvan out-of-town art gallery designed by the architect of London’s Shard.

We stayed at the handy and comfortable Hotel.D. Photo, above – Flixbus.

This ancient and modern city, founded on the pharmaceutical industry, with some of the biggest companies based here, doesn’t fit the Swiss national stereotype. There is no lake, and the nearest snowy mountains are miles away, although the green and pleasantly rolling Black Mountains of Germany are close. This is entry-level Switzerland, just over the borders of France and Germany. At the terminus of the number 8 tram line you are a short walk from a point where three nations meet. We took the train from London. It’s an easy six hours with one change. Hotels  hand out free ‘go anywhere’ public transport passes, which makes getting about exceptionally easy. Elegant trams glide hither and thither. Sample a few at random, and you will see most of the city. The latest trams even offer free Wi-Fi. 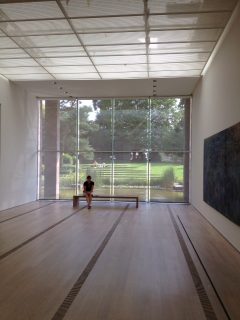 For a few beautiful moments, in a gallery room flooded with natural light, we were all alone with one of the dreamiest of artist Monet’s water lily paintings, the Water-lily Pond. That is a privilege you rarely enjoy in crowded, city centre galleries. It was worth the 20 minute trip on the number 16 tram from the city centre just for that. But there is more to the bright and restful Fondation Beyeler Gallery than the many fine works (artists include Degas, Seurat, Lichtenstein, Picasso and Miro) displayed inside. This low, glass clad building shares an architect, Renzo Piano, with a structure we are coming to know well, London’s Shard. Piano, who also designed the Centre Pompidou in Paris, has made this little gallery a destination in itself. It backs onto open fields and a gentle hill lined with vineyards. 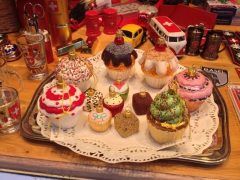 Johann Wanner’s year-round Christmas House, in Spalenberg in the heart of old Basel is a city institution. It was here where Hillary Clinton bought decorations for the White House, and Princess Diana paid a visit. Items are expensive, but quality is high, www.johannwanner.ch. There’s a cupcake shop of distinction next door (www.cupcake-affair.ch), one of many smart independent shops in this and adjoining streets. The University Botanic Gardens (free) is a short walk away. Its hot glasshouses are a welcome refuge in a cold day. Other interesting features include the fountains, 102 of them. The only one you can’t drink from is the Tinguely Fountain, full of moving devices made from old theatre machinery.

Inside the 1000 year old cathedral, which dominates old Basel with its red sandstone, and green and yellow roof tiles, we found ourselves on a five minute mission, with a perfect stranger. A touristic cameo to treasure. A determined little French lady came up to us and asked if we could point out the slab commemorating Erasmus, the free-thinking Dutch theologian who was buried here in 1536. We searched together. No luck. She asked at the desk. Still couldn’t find it. She asked again. This time, success. It was behind a pillar that seemed to have mysteriously sprouted since we looked last. Basel has many other fine churches, museums and galleries. How about the Cartoonmuseum, said to be the only museum in the world devoted exclusively to satirical art – from the caricature to the comic.

The world in a pocket

There’s a door in a house in a steep narrow street in the Old Town which doesn’t open. That’s because the door itself is a museum, said to be the world’s smallest. The owners of 31 Imbergässlein were tired of people peering nosily through the glass, and decided to give them something to look at in the door itself. The Hoosesagg (Trouser Pocket) Museum was born. In the window section of the door they display random items in small wooden compartments. Recently it was fire engines, then storks, then Swissair planes. They can mount a special exhibition in five minutes flat. This summer (2014), for example, they displayed artefacts to mark the football World Cup. It’s brilliant – and free. Those inside are spared intrusion. And small children get an easy introduction to museum-going.

Go with the flow

It looks like ordeal by water, but, no, this is only Basel super-efficient and very ancient ‘reaction’ ferry. On our trip the Rhine is flowing high, after a wet summer. The boat has no engine, but the man who takes our money wears a ‘you’ll be quite safe’ smile.
The small wooden boat is attached to a high wire, stretched across the river, by a long moveable lead. The prow faces into the flow, and the helmsman simply steers the boat like a sailor tacking into the wind, using only the current’s power. I imagine the Romans devising a Rhine-crossing solution like this. It takes only a few minutes, shuffling sideways, and we are over. The stronger the current, the quicker the crossing.

We were in Basel on August 1, the Swiss national day. People lined the main bridge to see the fireworks. Walking the banks of the Rhine on August 2, we were surprised to see people in the water. Were they washing away their hangovers? Looking more closely we could see they were quite in control, and several had waterproof backpacks (the “Wickelfisch”, a fish-shaped bag for keeping clothes dry while swimming). They took to the water and drifted or swam with the current for several hundred metres, before making landfall on either bank of the river after a few minutes. It looked hazardous but they seemed competent and safe.

River swimming is taken seriously in the city according to the website – “the Rhine tempts swimmers all summer long”; there is a mass swim – the Basel Rhine Swim – on Tue 15 August 2017 6.00 pm. Thousands of swimmers, of all ages, take part in this.

There is a good choice of convenient city-centre hotels

We stayed at the handy and comfortable W hotel.

Freiburg, 38 minutes away by train, is a leading eco-city in Europe

Freiburg, 38 minutes away by train, about an hour by road, is Sun City in Germany’s Deep South, on the borders of the Black Forest. It is a keen contender for the crown of environmental capital of Europe, a restored medieval masterpiece with pavements made from river Rhine pebbles, 13th century stained glass windows and little canals narrow enough to step over in narrow streets, together with a solar-powered car park and one of the world’s first zero emission hotels. And all the Black Forest Gateau you can eat.