When Worcester started cricket in the sweetest month

The Severn at Worcester, taken through a slightly smeary train window

When Worcester started cricket in the sweetest month

April was always the sweetest month for the true cricket fan, the air fresh and cool, the grass lush after winter rains, a light green patina of emerging leaves. Promise for every single team, still undefeated, and the delicious prospect of all those games to come.

It’s not the same today, of course, with the season beginning abnormally early (if it ever finishes at all), in order to pack in so many revenue-raising tours and competitions.

2020 is different. Probably for the first time outside wartime, cricket is suspended. Players will suffer,  and so will staff and the many others who rely on the game for their income. The one consolation for the cricket follower is that this game, like few others, can be lived in the past as well as the present. Its history is astonishingly rich and this is an opportunity to return to it.

If I could time-travel back to a single April game, it would be opening fixture of the Australians’ tour, at Worcester, Apr 28-30 1948. 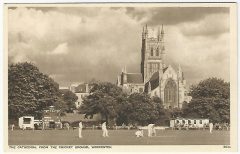 Touring teams (and in those days only one overseas side toured in the summer) traditionally played their first game at Worcester. This was the quintessentially English setting, under the cathedral, on the banks of the River Severn, in Edward Elgar’s country.

Imagine the thrill for an impressionable youngster when the most illustrious cricketer of the age, and arguably the greatest batsmen the game had seen, Don Bradman, walked out before a ground record crowd of over 14,000. It was his last tour. He was captaining one of the the greatest teams there ever was.

No one expected a contest. But Worcestershire were not disgraced. The game lasted the full three days, and Australia won by an innings. And Bradman? Naturally, he scored a century. So did opening bat, Arthur Morris. 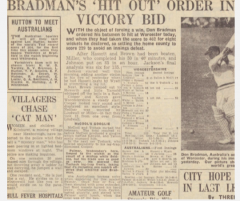 Reading the team sheet I noticed that I had actually seen one of the Worcestershire players who played against the Don and the Australians that day. It was Don Kenyon. 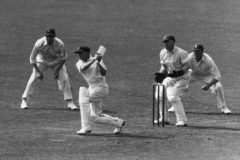 Kenyon was still playing in the 1960s, when I saw him bat for Worcestershire against Glamorgan. A tenuous link into the great game’s glorious past. But making connections is what following cricket is all about.

Here is some cricket reading, recommended by the Guardian, for these fallow spring weeks to come.

And my own modest contribution to the literature – my account of that day at Swansea when Garry Sobers became the first person to hit every ball of an over for six: