The second series of the six-part thriller Keeping Faith (Un Bore Mercher in Welsh) opened on May 12th on Welsh-language channel S4C. It was, coincidentally, the same evening that Killing Eve, another series celebrating powerful performances by female actors, won three Baftas in the 2019 British Academy Television Awards.

What sets this particular drama apart, is that, set in South and West Wales, its original language is Welsh. Just as with the first series, which was launched on S4C as Un Bore Mercher, this follow up series too starts in Welsh – it is already available on iPlayer in its original language and with English subtitles.

The English-speaking version. series two of Keeping Faith, will be shown on the BBC in the summer of  2019. At least this time the schedulers are in no doubt where it belongs, primetime on BBC1. Last year it  took a tortuous route there. It started on S4C, where it was screened in Welsh. Then it was shown on BBC Wales, in English. After that it was released on the BBC iPlayer, where the series had 9 million downloads, then a record for the medium, making it the most prominent example of the genre of Cymru Noir. Then it was shown on BBC1, after the programmers acknowledged its phenomenal success.

The eight part drama, set in South Wales (the principal locations are Laugharne, Carmarthen, Swansea and the splendid Carmarthenshire and Glamorgan coastline) revolves around the magnificent, yellow-coated Faith Howells (Eve Myles), a small-town lawyer and mother of three, whose husband sets off for work one day and doesn’t come back. Faith’s challenge, with the pressure ratcheted up from episode to episode, is to find her husband and hold her family together.

The series is written (in English) by Matthew Hall. Jointly produced by BBC Wales and S4C, it has been made in English and Welsh versions, with each scene being shot twice, once in each language. Eve Myles was so keen to play the part of the dominant central character Faith that she learnt Welsh so she could do so. 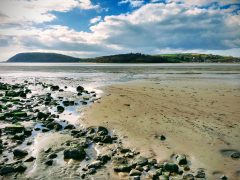 A beach in Carmarthenshire, Photo: GHD

As is normal practice with TV, and especially BBC productions, little is made of the locations – unlike feature films, they’re not identified in the programme credits. It could be argued that locations are secondary, and either they’re so well-known that they don’t have to be explained – speedboat chases on the River Thames for example – or it doesn’t matter that the majority of viewers don’t recognise places, because they are not important to the plot. ( BBC series Line of Duty, for example, was filmed in the West Midlands, but you’d hardly know, unless you are familiar with the buildings. The location isn’t particularly important.)

Yet when viewers see so many external shots of Faith’s very well-appointed seaside house, looking over a quiet and pretty little seaside town, with boats tied up on meandering channels and a castle in the background, their curiosity is bound to be aroused. This principle location is Laugharne, the Carmarthenshire village where the poet Dylan Thomas famously lived, worked and sat and talked in the pubs. The waterfront is the River Taf estuary, his “mussel pooled and heron priested shore”.

The castle turned Tudor mansion – ‘Brown as owls’ in Thomas’s ‘Poem in October’ – was built in the 13th century by the de Brian family, probably on top of an earlier Norman structure. It was roughed up, in the 1600s, by Parliamentary forces after they captured it.

There are many shots of the streets in the town, although the police station – and in real life this town is probably too small to have its own police station – is in Pontardawe, near Swansea.

Some of the courtroom scenes take place in Carmarthen, in the old Town Hall, although, as often happens with screen locations, sequences are merged into those filmed at another much bigger civic building, in Swansea, 20 miles to the east. One key scene shot in Guildhall Square, Carmarthen.

The last thing the programme makers want is for viewers to distract themselves by puzzling over seemingly impossible changes of location, when characters drive away and, within minutes, are at a place many miles away. It’s enough to say that certain scenes take place around Nash Point, far away in the east, in Glamorgan. Even a furious Faith could not have driven there that fast. But most of the waterside scenes were filmed at the estuary in Laugharne, while some of the most dramatic beach sequences were shot nearby on the beach at Pendine.

Vague though the details of the locations are – I believe only Swansea was name-checked in the script in the first series – I think it’s important that viewers have a single, approximate place in which to anchor this adventure when they could be watching it for eight hours, just as they knew that Broadchurch was set somewhere on the coast of Dorset. They are entitled to know (and will be pleased to) that this is Carmarthenshire, with a few excursions east along the South Wales coast.